2003 NOVEMBER - CHINA - GUIYU.Computer wires and components out of E-waste burn along the Liangjiang river releasing dioxins and some other toxic smoke. Il cartello avverte: 'Rendiamo più bello il panorama'...Since 1995, Guiyu has been trasformed from a poor, rural, rice growing community to E-waste processing center. Throughout a clandestine network of sea-freight transports a remarkable percentage of computer age´s waste arrives here; mainly it comes from USA but also from Europe and technologic Asia. For a remuneration of $ 1.5 per day, 240,000 people work in the dismantling process of E-waste. In the streets of Guyu, men, women and children work without masks and gloves in contact with extremely dangerous acids and chemical solutions separating heaps of computers, printers and scanners in order to recover plastic and metals from the electronic components. The environmental and sanitary disaster in Guyu is severe, especially for local population. There´s no-more drinkable water in Guyu and the ground contains dangerous substances in a quantity that is esteemed 2000 times higher than the tolerated average. 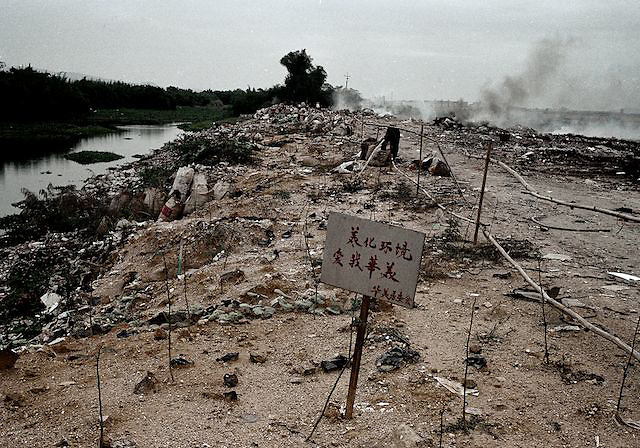